A young boy who has a severe phobia of everything and lives a life based on the statistics of accident occurrences. Sent out to the hardware store by his concerned father, Richard gets caught in a storm and takes shelter in a library. Knocking himself out by slipping on a wet floor, he becomes an animated character and ventures on a journey through the library's fiction section to find the exit. 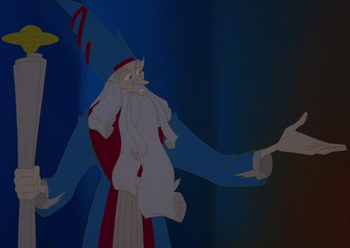 The title character and guardian of literature and reading. He sends Richard on his journey to find the exit, hoping he will overcome his fears. Possibly related to, or is, Mr. Dewey.

A friendly but mysterious librarian who gives Richard his library card. It appears he does not get many visitors to the library and is quite enthusiastic at getting people to check out the books.

A talking book who is an adventurous, daring pirate. He meets Richard after he crashes a book cart into his shelf, Adventure spotting his library card and accompanies Richard to find the exit so he can be checked out.

A sassy book from the fantasy section. Mis-shelved, Fantasy meets Richard by chance and agrees to guide him through the library in exchange for checking her out.

The third of Richard's book companions. Horror is a misshaped book who Richard meets in the horror section, and they quickly bond due to their timid nature, but both learn to become braver over time.

The first literary character met in the film. A gentlemanly Mad Scientist, Dr. Jekyll creates a potion to split apart his dark side, only to transform into the Ax-Crazy Mr. Hyde.

The second literary character in the film. Ahab, like in the book he was from, is dead-set on killing Moby Dick.

The third literary character met in the film. Like in the book, Long John has rallied a band of pirates to find Flint's trove on Treasure Island.

The final obstacle between Richard and the exit. An enormous fire breathing dragon who attacks Richard and his friends after they wake him up.