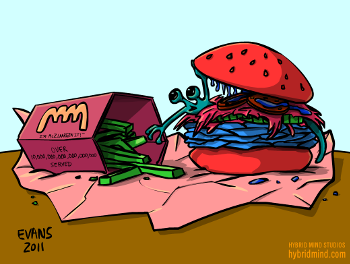 "Alien Fast Food" by David Evans
Martin Lloyd: This is for scene 23? You think they have apples on an alien planet?
Prop Master: Why not? They speak English.
Martin Lloyd: Look, get some kiwis, and spray-paint them red.
Prop Master: (pulls out script) OK, so now it'll go "Nick walks into a garden of kiwi trees, says 'How like Eden this planet is,' and bites into a painted kiwi."
— Stargate SG-1, "Wormhole X-Treme!"
Advertisement:

The culinary equivalent of Rubber-Forehead Aliens. Alien cuisine has a suspicious tendency to look like Earth food ripped from its terrestrial context and subjected to food colouring — leading to things like green egg yolks, glow-in-the-dark yellow sauces, obsidian berries, and blue meat.

This rises from production considerations, of course. It takes time and energy to think up genuinely alien foodstuffs, and money to fabricate them — and in the end, the viewer might not even realize it's supposed to be food. By keeping the forms the same, creators can make it clear that a pudding is the ambassador's dinner and not, say, his wife; by shifting the palette, they retain a sense of otherworldliness.

The more humanoid the aliens in question, the more plausible this trope becomes. Green-skinned people who are shaped just like humans might very well share a biome with red-skinned vegetables that are shaped just like asparagus. A Metal Muncher may munch on meals that have a metallic color, sometimes with visible seams and rivets to further emphasize that they are metal.

See also Alien Lunch, for alien food that no human could stomach.