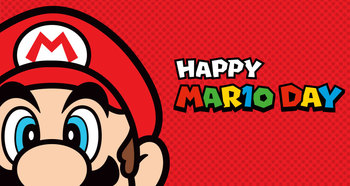 Have a super March 10th!
"Do you know why so many hurricanes hit Miami? [...] Because back on November 5th, 1991, mayor Xavier Suarez proved that if you don't keep the mayor busy with catastrophic disasters, he runs around declaring holidays about video game systems."
— Seanbaby
Advertisement:

Fans will seize any opportunity to celebrate their favorite work, so if there's a reason to associate the work with a certain date, they'll often try to make an unofficial (and sometimes official) holiday out of it.

Common reasons a particular date may be significant to the fandom:

Celebration can occur at several levels. Some fans may simply gush about the holiday on social media and enjoy the work on their own time, some will put out crafts and fanart, and others will wear themed cosplay and attend holiday meetups to party with other fans. Official marketing for the franchise will certainly celebrate as well, possibly by releasing new content on the day. If the holiday gets big enough, the holiday may become a nationwide or even worldwide celebration that even people not seriously familiar with the work may celebrate the holiday anyway. Some cities have even officiated certain pop culture holidays.

When the same date holds significance for multiple works, expect crossovers between Friendly Fandoms celebrating together.note For one example, if you've ever seen fanart of Fullmetal Alchemist characters re-enacting scenes from Mean Girls, it was probably released on October 3rd. Unfortunately, this also means that some Pop Culture Holidays have shared dates with tragedies, such as September 11, which may result in the said Pop Culture Holiday canceled temporarily or permanently, or moved to a different date relevant in the story, if the tragedy overshadows the work.