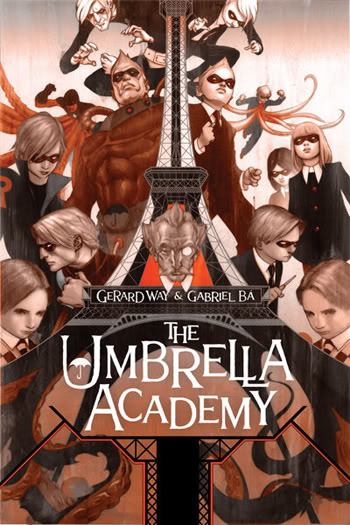 The Umbrella Academy is a Comic Book written by Gerard Way of My Chemical Romance and drawn by Gabriel Bá, published by Dark Horse Comics.

One day, 43 extraordinary children were all spontaneously born on the same day to women who had shown no signs of pregnancy. Of these children, seven are adopted by the inventor (and space alien) Reginald Hargreeves and groomed into superheroes. However, Hargreeves does not prove to be a good father figure and his inability to give emotional warmth to the children, along with his unwavering ambition to push them to their limits, inevitably scars them all as adults. In many ways The Umbrella Academy is both a deconstruction and Affectionate Parody of Gold and Silver Age comics, joyfully embracing absurd and wonderful classics like talking monkeys and space squids while exploring the real psychological effects of being groomed from birth to be a hero in the care of a wealthy man of intrigue.

The main series takes place after Hargreeves's death where the team reunite at his funeral. Comics include:

A live-action series was released by Netflix. Three seasons are available, with the latest being released on June 22, 2022.

Unrelated to the Umbrella Corporation.