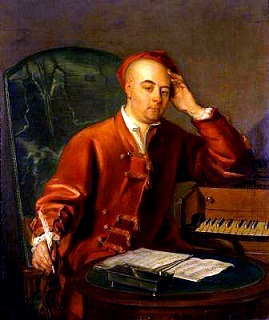 "I thought I saw the face of God."
— After composing the Hallelujah chorus for Messiah
Advertisement:

German-born English composer (23 February 1685 – 14 April 1759), an exact contemporary of Johann Sebastian Bach (Bach was born 37 days after Händel), although they never met, even though they were from the same general part of Germany (his birthplace of Halle is not quite 200 km by road from Bach's hometown of Eisenach).note They did, however, have an unfortunate mutual acquaintance—they both were taken in by the English quack "oculist" John Taylor, whose attempts to surgically correct their cataracts probably robbed both of what was left of their eyesight. His birth name was Georg Friederich Händel, but when he moved to England and became a naturalized citizen he anglicized the spelling; music scholars will go either way with it.

Händel made his name and fortune composing operas in Italian, writing over 40 of them, most of them for the English market after he moved to London; he was the first ever composer to get rich and famous from composing. So many people wanted to attend just the rehearsal of his "Music for the Royal Fireworks" that it caused a three-hour traffic jam on London Bridge. In the 1740s, the audience's taste for Italian opera mysteriously went away, helped along by the smash hit of John Gay's The Beggar's Opera in English. After a brief period of reconsideration, he saw what the audience wanted and began to write oratorios in English, the most famous of which (and most famous overall) is Messiah. (Yes, it's the one with the "Hallelujah" chorus.)

Works by Händel with their own pages: