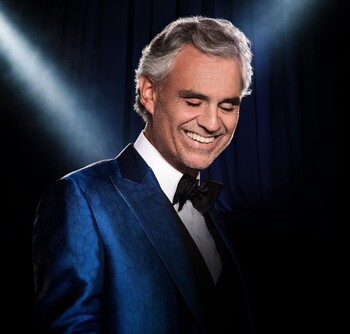 Andrea Bocelli is a blind Italian classical crossover tenor. He is a renowned artist, having produced many of the best-selling classical albums of all time.
Advertisement:

Born in 1958 in a small village near Pisa, Tuscany, Andrea was a farmer's son who always had a great passion for music. He was not blind from birth, although his eyesight was never good. He went completely blind at the age of 12, after sustaining a head injury during a football match. Despite his inability to see, he has knowledge on how to play a variety of instruments, such as flute, saxophone, and guitar. His professional career began in 1992, becoming introduced to the US in 1998. His albums have sold over 80,000,000 copies in total, making him the best-selling solo artist in the entire history of classical music.

He has a law degree from the University of Sienna, practiced for several years before his music career took off, and has maintained his license.