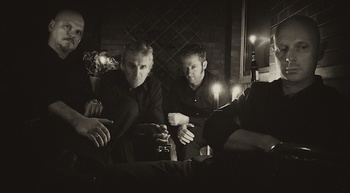 Bohren & Der Club of Gore is a German Ambient/Doom Jazz band from Nordrhein-Westfalen. Started in 1992 by Thorsten Benning, Morten Gass, Robin Rodenberg and Reiner Henseleit, the music was described by the band as an "unholy ambient mixture of slow jazz ballads, Black Sabbath doom and down tuned Autopsy sounds."
Advertisement:

In practice, Bohren's music is dark, brooding, and often difficult to follow. They swing back and forth between "ambient" and "jazz," creating a musical sound that can be difficult to describe.