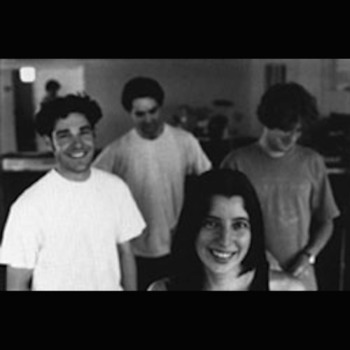 From left-to-right: Alex Stevens, Howard Healy, Gab Cotton, and Dan Erickson
Bluetile Lounge was a Slowcore band formed in Perth, Australia during 1991 consisting of Daniel Erickson (vocals, guitar, piano), Howard Healy (vocals, guitar, bass), Gabrielle Cotton (guitar, piano, vocals), and Alexander Stevens (drums, percussion). They spent several years perfecting their sound, until 1995, where they released, Lowercase, on the Summershine label per the reccomendation of Alan Sparhawk. In 1998, they released their second, and final album Half Cut on Steve Shelley's the Smells Like Record label.
Advertisement:

Musically, they've been compared to other Slowcore artists such as Codeine and Low, but what distinguishes them is that they managed to make music that was even slower than the aforementioned bands. The result is an incredibly interesting wall of sound. Though relatively unknown, Bluetile Lounge's limited output is some of the most luminous work that the Slowcore genre has ever produced, and is considered one of the better ones to have emerged from the movement.