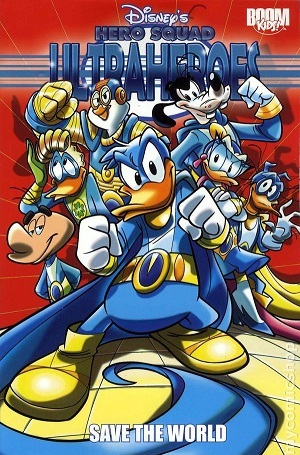 An Italian comic series that shows the Disney super heroes from Mouse and Duck comic worlds as a team. Think The Avengers and Justice League with classic Disney characters. The original story was scripted by Alessandro Ferrari, Giorgio Salati, and Riccardo Secchi. First published from February to April, 2008. There have been a number of sequels.

When Scrooge McDuck and his money bin disappear, Mickey Mouse and Eega Beeva assemble the heroes Paperinik (Donald Duck), Paperinika (Daisy Duck), the Red Bat (Fethry Duck) and Super Goof (take a guess), plus new heroes Cloverleaf (Gladstone Gander) and Iron Gus (Gus Goose) to find the Ultrapods, pieces of a hidden weapon named the Ultramachine, before Emil Eagle and his supervillain team, the Bad-7, do. The Bad-7 are composed of Pete, the Phantom Blot, Roller Dollar (John Rockerduck) and ex-Paperinik enemies Inquinator, Sapphire and Spectrus.