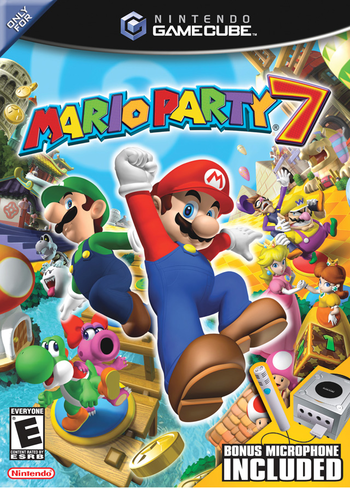 Mario Party 7 is a video game developed by Hudson Soft and published by Nintendo for the Nintendo GameCube in 2005. It's the seventh installment in the Mario Party series.

This game has an "around-the-world" theme, and the boards are based on slightly stereotyped versions of real countries like USA, Egypt, and China. It all begins when Toadsworth, having observed Mario's achievements in his life (rescuing Princess Peach, saving the Mushroom Kingdom and other lands, winning previous parties, etc.), offers him and his friends the vacation of their lives, which the famed plumber accepts enthusiastically. Lo and behold, they board the luxurious MSS Sea Star to visit several parts of the world. Unfortunately for all of them, Bowser catches wind of the plan and is furious that he wasn't invited; so he'll do what it takes to sabotage their vacation, and the heroes' objective is to prevent that. And what a better way to settle it than by partying once again? Being the character who is handling the vacation trip, Toadsworth serves as the party host.

This game carries over several novelties from its immediate predecessor, Mario Party 6: It, too, is embedded with the Microphone for its use in speech-based minigames; the boards, once again, present new and inventive methods for the obtainment of Stars; the Orbs make yet another return (carrying over the revamped gameplay from 6), and now there are Orbs exclusive to certain pairs of characters; lastly, Solo Mode returns, though this time it does stand in for other games' Story Mode, as it's here where the game wraps up the conflict between Bowser and the heroes, and also includes a Boss Battle against him (such element was absent in the previous game, due to not having a Story Mode either and its Solo Mode not pertaining the resolution of the game's theme).

However, the game also features its own unique concepts, including one that expands upon a gimmick seen in the last board of Mario Party 2 (Bowser Land): Since Bowser aims to sabotage the heroes' vacation even during the party sessions, every five turns he'll perform a detrimental action that affects them in some way. He may replace one of the Orb shops with a Bowser shop where any character who passes by is mandated to buy a bogus item for a high price, he may destroy one of the board's bridges, he may throw three Koopa Kid orbs at the board (each falling onto a specific space), he may force all characters to pose for a photo shot and then charge them 20 coins each for it, or perform an evil action that is related in some way to the Star's collection method in the board. The moment when he performs any of these actions is called Bowser Time, and its arrival is reminded at the end of each turn by a Bowser Icon whose brighter color fills up a segment until the marked moment when it fills completely.

The game can also be played by eight players, both in Party mode and Minigame mode. Unlike other games where the LAN accessory of the GameCube was used for this purpose, such as Mario Kart: Double Dash!!, this one simply has the four controllers shared each by two players, making it so Player A uses the Control Stick and the L button while Player B uses the C Stick and the R button. In standard Party Mode, the eight players split into four teams, and in each of them the left-placed player takes control of walking and actions in the board during odd-numbered turns, whereas the right-placed player does in the even-numbered ones; the player in turn also plays as their character to represent themselves and their partner in the standard 4-player, 1-vs-3 and 2-vs-2 minigames. From time to time, an 8-player minigame will be played, and there all 8 players participate with their respective characters. There are twelve minigames tailored for 8 players, and they can be played in both Party Mode and a special mode accessible in the main menu.

The game has a grand total of 88 minigames, becoming the numbered installment with the most extensive catalogue in the series (it's only surpassed by Megamix Games The Top 100 and Superstars which have 100 each, while the mainline game that comes closest to equaling it is Super Mario Party with 84). The availablity of 8-player minigames, plus the increased number of DK and Bowser minigames, helped in this case. This game adds Birdo and Dry Bones to the roster (while Koopa Kid is no longer playable; instead having his own space), though they have to be unlocked first.

Finally, this was the penultimate Super Mario Bros. game released on the GameCube in Japan and North America (the last overall was Super Mario Strikers); in Europe and Australia, due to Strikers being released there first, the distinction for being the last Mario game overall on the GCN goes indeed to Mario Party 7.