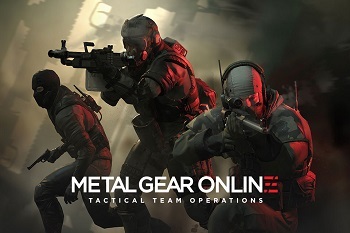 Advertisement:
Subsistence Metal Gear Online
Subsistence's version of Metal Gear Online was featured in the second disc of Metal Gear Solid 3: Subsistence. It allowed up to 8 players to compete in tournament style game modes. Players took control of enemy soldiers from Snake Eater (namely from the KGB, GRU and Ocelot Unit), as they fought with a variety of weapons, including primary weapons (Skorpion, AK-47, M37, Dragunov, or more), secondary weapons (M1911 or Mk 22), and support weapons (grenades, claymores... porno magazines?). Players could even choose their own background music from previous Metal Gear titles. Unique characters could also be used, such as Ocelot, Sokolov, Raikov, and, oddly, Reiko Hinomoto from Rumble Roses (in both regular and "Rowdy Reiko" forms).

This incarnation of MGO did contain a slew of problems (like the MGS3 play mechanics not really being compatible with competitive multiplayer, faulty net-code, etc), but it has earned a cult following, and there is even an online community that preserved it through unofficial servers thanks to emulation long after its shutdown in 2007.

Guns of the Patriots Metal Gear Online
Metal Gear Solid 4: Guns of the Patriots' version of Metal Gear Online was included in all releases of Metal Gear Solid 4. It also had a standalone release in Japan. Up to 16 players could compete. It introduced plenty of new features based on the main MGS4 mode, such as the SOP system, which allowed players to link with each other so they can coordinate and cooperate more efficiently, as well as help each other out indirectly, such as spotting enemies to appear on their SOP. They just need to remember to reconnect with every player that isn't yet established in each life.

Instead of controlling a mook, the game has a character customization feature, allowing players to craft their own mercenary, and in a later update, allow them to earn reward points so they can purchase more customization parts for their characters, as well as other features and effects (such as poses). Purchasing downloadable content allowed access to make female characters, as well as being able to earn additional sets of custom parts.

The game also introduces Drebin Points (which can be disabled by the host), allowing players to earn points for certain actions, as well as spend points on a bigger library of weapons and weapon mods. There is also a skill system, which provides the player with four skill slots, and requires the player to continue performing a certain task repeatedly to level them up. Some skills will remain in that one slot, while many others will eventually demand three skill slots to utilize the bonuses. Some skills include efficiency with other weapons, spotting enemies by aiming at them, being faster, inflicting more damage with CQC and rolling, being able to perform more complex CQC maneuvers, etc.

All the game modes from the previous version of MGO made a return, with some changes as noted:

The Phantom Pain Metal Gear Online
In 2015, it was announced that the third iteration of the title would be bundled with Metal Gear Solid V: The Phantom Pain, and would go online a month after initial release. The gameplay makes a shift towards the additions from MGSV and revisions to mechanics, such as marking, vehicles such as Walker Gears, and taking selfies.