Film / Never Back Down 2 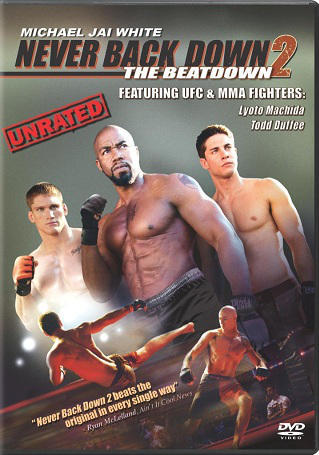 "Now remember — an angry mind is a narrow mind."
Advertisement:

Mike Stokes (Dean Geyer) is a college wrestler with daddy issues AND anger management issues. Zack Gomes (Alex Meraz) is a cocky up-and-coming boxer forced to retire due to an eye injury. Tim Newhouse (real-life UFC fighter Todd Duffee) struggles to make ends meet for his family following the death of his father. And Justin Epstein (Scottie Epstein) is a bullied comic book store clerk with poor self-esteem. These four young men are all set to take part in the Beatdown, an underground mixed martial arts tournament now promoted by college student Max Cooperman (Evan Peters), Jake Tyler's best friend in the first film. But first, they need to truly learn the sport of mixed martial arts, emphasis on mixed, with former MMA fighter/ex-convict Case Walker (Michael Jai White) as their trainer. Walker is stern, strict, and largely humorless, and the trainees can't stand each other, but they eventually develop respect for their mentor, and the respect and friendship of one another.

Well, except one of them, though we'll get to that later.

The film marks White's directorial debut, and a third movie in the series, also starring and directed by White, began filming in June 2015.