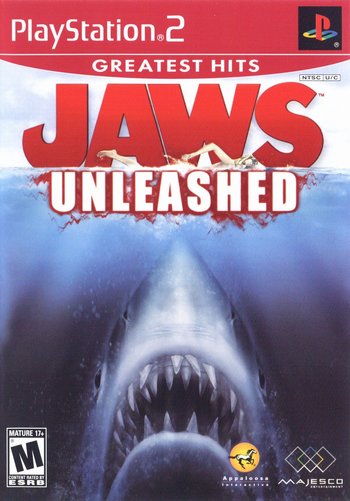 You. Are. The Shark.
Advertisement:

Jaws Unleashed is a video game developed by Appaloosa Interactive and released on the PlayStation 2, Xbox and PC, based on the Jaws film franchise. You get to play as the big bad Great White itself, who chomps its way through sea life, humans, and their constructions.

Though it received mixed reviews, it was a commercial success, selling over 250,000 copies on Xbox alone, and is still fondly remembered by those who played it when it came out, hailed as one of the best games where you get to control a predator.

A sequel Jaws: Ultimate Predator was released in 2011 for the 3DS and Wii, while another, Jaws: Revenge was made by Rebellion and released for mobile devices.

For a similar game on iOS, see Hungry Shark Evolution.

The 2020 open-world shark game, Maneater, was inspired by Unleashed.

Examples in this game: