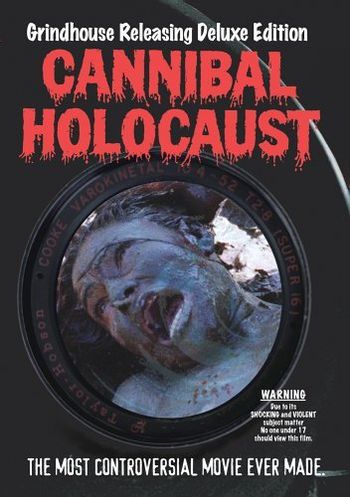 Don't judge a book by its cover... It's much worse than the cover suggests.
"Eaten alive! The ultimate terror movie..."
— Tagline
Advertisement:

Cannibal Holocaust (1980) is a controversial exploitation horror film directed by Ruggero Deodato, telling the tale of four documentarians who journey deep into the Amazon rainforest to film the indigenous tribes. When they fail to return, anthropologist Harold Monroe leads a second expedition to rescue the first group. He ultimately finds their lost cans of film, through which he learns of both what the filmmakers got up to during filming, and their grisly fate.

Controversy followed this infamous "video nasty''; after its premiere in Italy, the film was seized and Deodato arrested on obscenity charges. He was later accused of making a snuff film due to rumors that actors were killed on camera. While he was cleared on all charges, the film was banned in Italy, the UK, Australia (where it was eventually passed uncut), and several other countries due to its graphic depiction of gore, sexual violence, and the inclusion of six genuine animal deaths.

In 1981 a rip-off was made by Umberto Lenzi called Cannibal Ferox.

In 2020, to celebrate the film's 40th Anniversary, a video game sequel

, titled Borneo: A Jungle Nightmare (titled as Ruggero Deodato's Cannibal early in development), was announced. The game is developed by Fantastico Studio under the direction of Deodato himself. It will be released for Playstation 4, Xbox One, Nintendo Switch, Steam, and mobile.