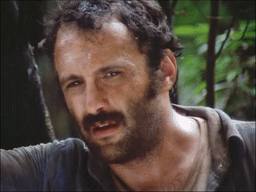 "I wonder who the real cannibals are?"
An anthropologist at New York University who was sent in the Amazons to find and recover the crew.
Advertisement: 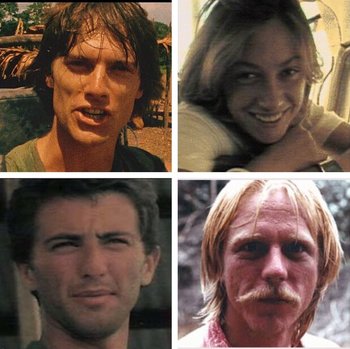 From top left to bottom right: Alan Yates, Faye Daniels, Mark Tomaso and Jack Anders.
The crew controlled by the director Alan Yates who were sent in the Amazon to make a documentary about the cannibals, it turns out that they were nothing what the people expected them to be as it was revealed that they terrorised the tribe people such as burning their huts with people inside it, raping a woman and highly implied that they impaled her and being cruel to the animals, they were so vile that the cannibals seemed to fear them and called them evil.

Check the folders below about them. 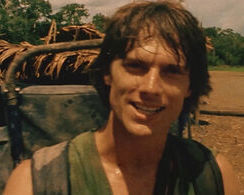 The true savage.
"Here we are at the end of the world in human history. Things like this happen all the time in the jungle. It's survival of the fittest! In the jungle it's the daily violence of the strong overcoming the weak."
The main man of the crew. A documentary filmmaker and an anti-war activist who also added violence in his projects such as with his documentary aired in BBC about innocent people being executed. He and his crew went to the Amazons to create their next documentary called The Green Inferno, years later they went missing and a rescue team came to find them. Despite them being dead, it was actually revealed that Alan was an utter monster who with his crew did horrific things in the Amazons for fame, greed and pleasure.
Faye Daniels
Alan's girlfriend, and the only one of the group with a shred of decency.
Mark Tomaso
One of Alan's cameramen, and the most sadistic of the group bar Alan himself.
Advertisement:
Jack Anders
Alan's other cameraman.

The Yanomamo
A cannibalistic Amazon tribe that are the focus of Yates' documentary.
The Yacumos
Another tribe that the crew targets.