Film / Can You Ever Forgive Me? 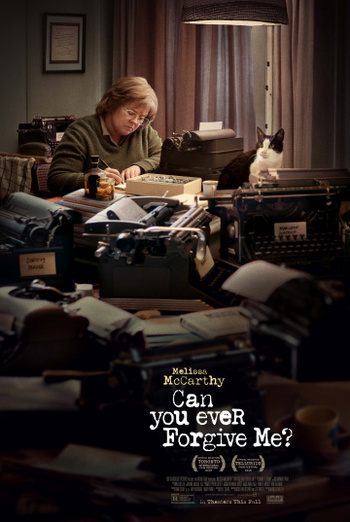 Can You Ever Forgive Me? is a 2018 American biographical comedy-drama film directed by Marielle Heller. Written by Nicole Holofcener and Jeff Whitty, it is based on the memoir of the same title written by Leonore Carol "Lee" Israel .

The film stars Melissa McCarthy as Israel, who made her living writing profiles of high-achieving women, but is unable to get her work published due to her preference for subjects that relatively few people are interested in. She then turns to her friend Jack who sells forged letters on her behalf.

The film, which also co-stars Richard E. Grant as Jack, premiered at the Telluride Film Festival and Toronto International Film Festival in September 2018, before being released on October 19, 2018.

Can You Ever Forgive Me? provides examples of: