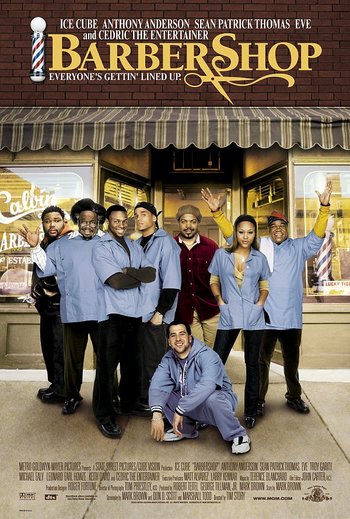 A 2002 American comedy film directed by Tim Story and released by MGM. Starring Ice Cube, Cedric the Entertainer, Sean Patrick Thomas, and Anthony Anderson, Barbershop revolves around social life in a barbershop on the South Side of Chicago. The movie also proved to be a star-making vehicle for acting newcomers Eve and Michael Ealy, and was followed by two sequels, a spinoff, and a TV adaptation.

Calvin (Ice Cube) has plans to launch a record label… which is yet another of the many plans he's had. Right now, though, he owns a pretty-much insolvent barbershop in south Chicago. His father and grandfather owned it before him, and he has a retinue of (mostly) black barbers working for him. Calvin has other plans, though, and sells the shop to Lester Wallace. However, Lester wants to take the shop in a direction that Calvin doesn't approve of, and Lester demands double what Calvin paid him to buy it back. Add to this that two guys steal an ATM from the convenience store near the shop, hoping to get rich from the money inside. Later on in the day, the police storm the shop and arrest one of the barbers. Said barber is an ex-con with two strikes on his record, and the robbers (one of them is the barber's cousin) used his truck in the crime. Even worse, they're willing to let him take the rap for the burglary. Can Calvin save his friend and the shop?

In 2004, MGM released the sequel, Barbershop 2: Back in Business. All of the original cast returned, but director Tim Story did not. This film was directed by Kevin Rodney Sullivan. In the same year, Billie Woodruff directed a spin-off film entitled Beauty Shop, with Queen Latifah as the lead (Latifah's character made her debut in Barbershop 2). The film was pushed back from a late summer 2004 release, and finally reached theaters in February 2005.

During the fall of 2005, production company State Street and Ice Cube debuted Barbershop: The Series on the Showtime cable network, with Omar Gooding taking over Cube's role of Calvin. The character "Dinka" is renamed "Yinka" on Barbershop: The Series, as "Dinka" is not a typical Nigerian name (although a certain tribe in the Nigerian middle belt bears the name "Dimka"). In addition, Isaac's last name is changed from "Rosenberg" to "Brice", and the character Ricky has been replaced by a more hardened ex-con, Romadal.

In 2016, the third film in the series, Barbershop: The Next Cut, was released. Directed by Malcolm D. Lee and distributed by MGM and New Line Cinema, this film brought back Ice Cube, Cedric the Entertainer, Sean Patrick Thomas, and Anthony Anderson and added Nicki Minaj, Common, Regina Hall, and J.B. Smoove among other new cast members.