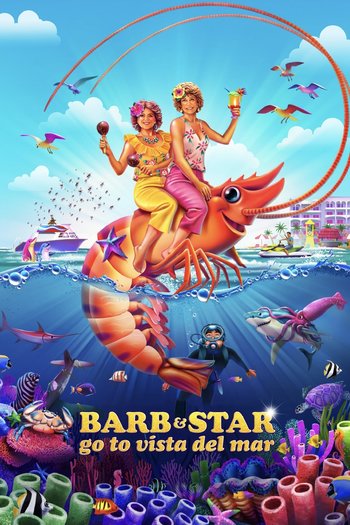 Barb and Star Go to Vista Del Mar is a 2021 comedy directed by Josh Greenbaum and written by Kristen Wiig & Annie Mumolo, who star in the film as well. It is also the duo's first project together since 2011's Bridesmaids.

The story follows Midwestern best friends Barb (Mumolo) and Star (Wiig) who are left feeling vulnerable after getting fired from their dream job at a furniture store and being ostracized from their friend group. Deciding they need to shake things up for themselves, they book a vacation to the beachside town of Vista Del Mar, Florida, where they inadvertently involve themselves in a sinister plot by Sharon Gordon Fisherman (also Wiig), a nefarious super-villainess seeking to obliterate that very same town.

Barb and Star Go to Vista Del Mar was originally scheduled to be released in Summer 2020, but the COVID-19 Pandemic obviously changed those plans and it was taken off the schedule indefinitely. It was finally released to PVOD by Lionsgate in February 2021.