Film / The Barretts of Wimpole Street 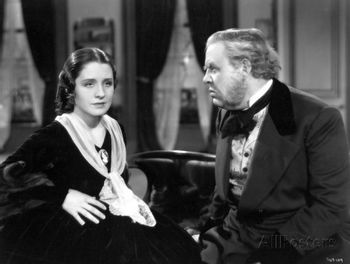 The Barretts of Wimpole Street is a 1934 film directed by Sidney Franklin, dramatizing the Real Life courtship and marriage of the famed Victorian-era British poets Elizabeth Barrett (Sonnets from the Portuguese) and Robert Browning.

London, 1845: Elizabeth "Ba" Barrett (Norma Shearer), then 35 years old, is already a well-known poet. She is also an invalid and shut-in, who has not left her room in years and hardly ever even stands on her feet. It soon becomes apparent, however, that Ba isn't quite as sickly as she's made out to be, and has in fact been kept semi-imprisoned by her cold and domineering widowed father, Edward Moulton-Barrett (Charles Laughton). Already rebelling against her father's dictatorial control, Ba has even more reason to rebel when admirer and fellow poet Robert Browning (Fredric March) pays a social call and declares his love for her.

Based on a 1930 stage play by Rudolph Besier, which starred the famous American stage actress Katharine Cornell. Cornell declined an offer to star in this film, and in fact never appeared in any film except for a cameo As Herself in Stage Door Canteen.

A remake, again directed by Sidney Franklin and starring Jennifer Jones and John Gielgud, was released in 1957.