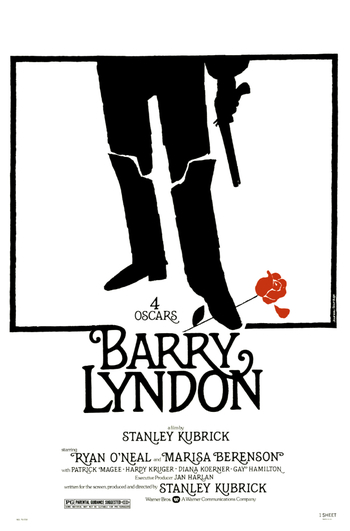 "It was in the reign of George III that the aforesaid personages lived and quarrelled; good or bad, handsome or ugly, rich or poor, they are all equal now."note By that the quote means they're now all dead.
Advertisement:

Barry Lyndon is Stanley Kubrick's 1975 period piece, widely considered one of his most underrated films. At 3 hours and 7 minutes, it's also Kubrick's second-longest film, just ten minutes shorter than Spartacus from 15 years prior. As the film is split into two distinct acts, though, it feels more like two movies packaged together than like a single, lengthy piece. Ideally, this work summary should be read while listening to George Frederic Handel's Sarabande

Set over the second half of the 18th century, the film concerns the life of Irish peasant-turned-adventurer-turned-aristocrat Redmond Barry (Ryan O'Neal), who leaves his Irish home after his family con him into leaving alone his cousin with whom he is besotted. The film's first act is a Candide-esque chain-of-events story showing how he then goes on to be a British deserter of the Seven Years' War, a Prussian conscript, a spy, and then a travelling dandy. The second act, however, is far more downbeat and involves his quest to become an aristocrat, which eventually leads to tragedy as he spurns his beautiful but fragile wife and brings his stepson to hate him with a passion.

In addition to being a perennial favorite of Stanley Kubrick fans (who often tout it as one of his overlooked masterpieces), it's also widely loved by history buffs who often hold it up as one of the most historically accurate films about the 18th century ever made. This is largely due to its unapologetic use of Deliberate Values Dissonance in its depiction of the time period, opting for an immersive Warts and All depiction of European society in the 1700s that doesn't bother making its characters likeable or sympathetic by modern standards. It also doesn't hurt that it was filmed entirely on location, with several interior scenes notably lit entirely by candlelight—an innovative technique that required using special ultra-fast camera lenses originally developed for NASA.

The film is based on the 1844 novel The Luck of Barry Lyndon by William Makepeace Thackeray, the author of Vanity Fair. Along with The Last of the Mohicans, it has the distinction of being one of the few major Hollywood films ever produced about the Seven Years War.