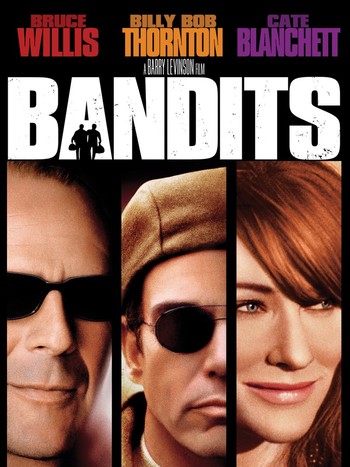 Bank Teller: Is this a joke?
Joe: No, ma'am. This is a bank robbery.

Tough guy with hidden depths Joe Blake (Willis) one day decides to escape from prison on a whim and takes with him super intelligent but highly neurotic Terry Collins (Thornton). Joe robs a bank to fund their life on the run, which turns out to be surprisingly easy and the two cohorts then hatch a master plan to rob banks across the country to amass enough money to flee south to Mexico, buy a bar and live out the rest of their days in comfort. Their modus operandi is to show up at the Bank Manager's home the night before the heist in a various array of disguises, spend the night and then force their captive to open the vault in the morning before the bank opens (effectively avoiding a hold-up situation), earning them the moniker, The Sleepover Bandits.

The plan runs smoothly until Terry literally runs into a woman called Kate Wheeler (Blanchett), an ignored and depressed trophy wife who is desperate for some adventure and romance in her sterile, suburban life. Joe, instantly attracted to her, decides to take Kate on as their hostage (she actually stays with them of her own free will and is, in fact, an accomplice), much to Terry's initial displeasure. Things take a turn for the worse when both men inevitably end up falling head over heels in love with their 'hostage' and she seems unable to choose between them, causing a serious fracture in their criminal partnership at a time when they're planning their biggest heist to date, one that will end their legendary crime spree in style...