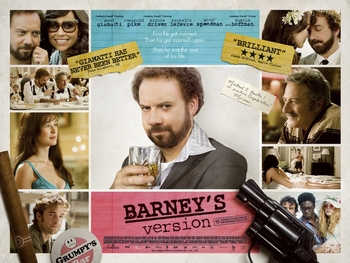 A 1997 novel by Canadian author Mordecai Richler, which turned out to be his final work of fiction before his death in 2001. Later made into a 2010 film directed by Richard Lewis.

The novel is the life story of one Barney Panofsky, a rather grumpy Montreal Jew (just like the protagonist of every other Mordecai Richler novel) who is famous for having three wives (and three divorces) and for having been accused of murdering his close friend Boogie circa 1960, for which he was acquitted at trial but judged guilty in the court of public opinion. A lifelong producer of crappy TV shows that has made him rich, Barney sets out writing his memoirs to refute what he sees as scurilous charges made by Terry McIver, a so-called great Canadian novelist (whose work Barney finds humourless and cardboard) who he knew in Paris in the early 1950s. Thus we learn the story of Barney's life, including his relationships with Clara (wife #1), The Second Mrs. Panofsky, and Miriam (wife #3), his three children, and his friend Boogie.

The book and film contain examples of: