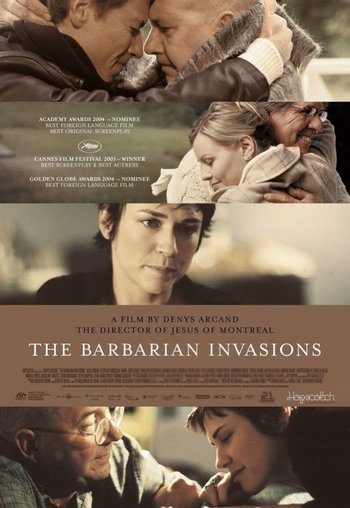 It is a sequel to Arcand's 1986 film Le Déclin de l'Empire Américain' (The Decline of the American Empire). 17 years after Remy and Louise's marriage ended explosively with the end of that film, they remain divorced. Worse for Remy, he is now terminally ill with cancer. His ex-wife calls their son Sebastien, now a very successful London financier, and urges him to come back to Quebec before it's too late.

Sebastien is somewhat reluctant to do this, because he blames his father's nonstop philandering for the breakup of their family. (He's right.) Remy, who is an old-school socialist, is rather embarrassed that his son is making a fortune in finance. Despite this, Sebastien does his best to make his father comfortable, bribing hospital administration into getting his father a private room, the summoning all Remy's old friends (the cast of The Decline of the American Empire) to his bedside.

Sebastien goes to a doctor friend for a second opinion, only to have his father's terminal diagnosis confirmed. Sebastien's friend also recommends that Sebastien get heroin, which is way better than prescription painkillers, for his father's pain. So Sebastien does just that, approaching an old acquaintance named Nathalie who happens to be a heroin addict.