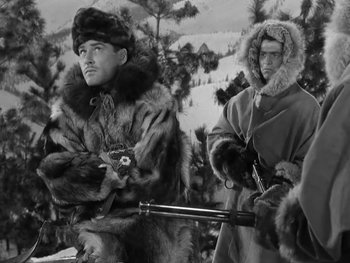 A German submarine surfaces somewhere in the frosty wasteland of Northern Canada (Hudson Bay?). The submarine disgorges a party of Germans led by a Luftwaffe officer, Col. Hugo von Keller. Hugo, the other Germans, and their Inuit guides set off to destination unknown—until an avalanche in a mountain pass kills everyone in the party except for Keller.

Keller staggers across the snowy plains of the Canadian north for a while until he collapses. Fortunately for him, he's picked up by a couple of Canadian Mounties, Steve (Errol Flynn) and Jim. Steve, who is the son of German immigrants, is rather excessively solicitous for Hugo's welfare, which makes Jim vaguely suspicious. When a second group of Mounties is dispatched to bring both Hugo and Steve in, Steve is so offended that he quits the service on the spot.

Later, when Hugo escapes from a POW camp, Steve is arrested as a precautionary measure. He is so angry that he says in public that "Canada can go to the devil." A bitter, angry Steve is receptive when von Keller's American handler, Ernst Willis, approaches him and asks for help with von Keller's mission. What von Keller and Willis don't know is that Steve's disaffection with Canada and new sympathy for the Nazis is all a ruse, and he is actually working to infiltrate their group and thwart von Keller's mysterious mission.