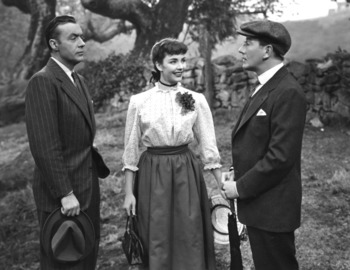 The sophisticated professor or the Stiff Upper Lip?
Advertisement:

Cluny Brown is a 1946 romantic comedy film directed by Ernst Lubitsch, based on the novel of the same name by Margery Sharp.

The film set in England in 1938, just before the war. Cluny Brown (Jennifer Jones) is a wannabe plumber who doesn’t know her place in society. She meets Adam Belinski (Charles Boyer), a mooching exiled professor, and they form a friendship. Both find themselves in a country estate, Cluny as a maid and Boyer invited as a guest of Andrew Carmel (Peter Lawford). Hilarity Ensues as Cluny makes plans to marry a boring pharmacist, Jonathan Wilson, a union which Adam tries to stop.

The last completed film of Ernst Lubitsch, who died in 1947 aged only 55, during production of That Lady in Ermine.