Film / Come Live with Me 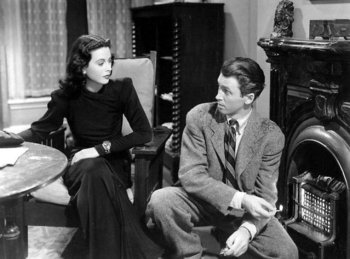 Striking both a match and a deal.
Advertisement:

Come Live with Me is a 1941 romantic comedy film directed by Clarence Brown, starring James Stewart and Hedy Lamarr.

Johnny Jones (Lamarr) is a refugee from "what was once Austria". Unfortunately she has overstayed her visa and is facing imminent deportation. Even more unfortunately, her boyfriend, wealthy publisher Barton Kendrick (Ian Hunter) is married.

Enter Bill Smith (Stewart), a would-be author who is apparently on the ragged edge of starvation. He is literally down to his last dime—and he then loses the dime. After a Meet Cute, Johnny makes a proposition: Bill can marry her. She'll pay Bill's living expenses until he gets a book contract, and she'll get to stay in America.

Compare Hold Back the Dawn, another 1941 film about a Citizenship Marriage.