Film / Hold Back the Dawn 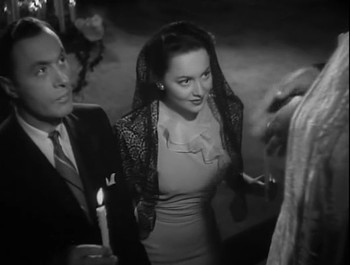 Georges Iscovescu (Boyer) is a Romanian dancer, but really a gigolo. Georges used to make a good living romancing the rich ladies of the European jet set, but when a little thing called World War II brought an end to that, Georges emigrated to the Americas. He finds himself stuck in a Mexican border town, unable to enter the United States for at least five years due to a very limited quota for Romanians, with no prospects, running up debt.

Enter Anita (Goddard), Georges's old dance partner from the European circuit, who has made a new life for herself as a gold digger. Anita, who is Australian, reveals to Georges that she gained entry into the United States by marrying a gullible American, whom she dumped as soon as she got a green card. She suggests that he do the same, and that the two of them can start a new life together after Georges gains entry to the USA and dumps his wife. Georges sets out to find a mark among the American tourists in the town and eventually meets Emmy Brown (de Havilland), a naive schoolteacher.

Getting Emmy to marry him is quick work for Georges. Unsurprisingly, while sitting out his four-week wait he falls in love for real with the beautiful, good-hearted Emmy. Also unsurprisingly, Anita is unwilling to be dumped.

Hold Back the Dawn netted de Havilland her second Oscar nomination; she lost Best Actress to her sister Joan Fontaine for Suspicion. This was the last film Billy Wilder ever wrote but did not direct. Conflicts with Mitchell Leisen over script decisions led Wilder to decide he needed to direct his own scripts.

Compare Come Live with Me, another 1941 film about a Citizenship Marriage.