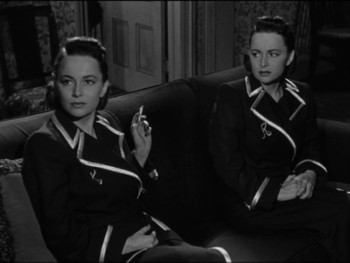 Guess which one is the Evil Twin.
Advertisement:

The Dark Mirror is a 1946 Psychological Thriller directed by Robert Siodmak.

The film opens with one Dr. Frank Peralta lying on the floor of his apartment, stabbed to death. Investigating officer Lt. Stevenson (Thomas Mitchell) soon finds multiple witnesses placing Peralta's girlfriend, Terry Collins (Olivia de Havilland) at the scene. Stevenson is confident that he has his woman—until Terry reveals that she has an ironclad alibi, as multiple witnesses saw her elsewhere that night.

Only it isn't Terry! It's Terry's identical twin sister and roommate Ruth (also de Havilland, of course) who was seen by multiple witnesses at a concert and walking in the park. Or was it Terry? All the sisters will tell Stevenson is that one of them has an alibi, and the other was home alone. They refuse to say which one is which. A frustrated Stevenson realizes that without any way to show which sister was the one seen at Dr. Peralta's apartment, he can't arrest either of them.

With no other option, Stevenson approaches Dr. Scott Elliot (Lew Ayres), another doctor in the same office building where Peralta practiced and where the sisters run a concession stand. Elliot is a psychiatrist who just happens to be conducting research on twins. Elliot recruits the Collins sisters for one of his twin studies. While finding out some dark things about Terry, Elliot starts to develop feelings for Ruth. Terry does not like this one bit.

One of only two films in which Olivia de Havilland played a villain, Hush...Hush, Sweet Charlotte being the other. The first film Lew Ayres made in four years, after he was fired from the Dr. Kildare series for supposedly refusing to serve in World War II—in fact Ayres had volunteered to serve in a non-combat role, and did serve as a front-line medic in the Philippines.