Film / That Lady in Ermine 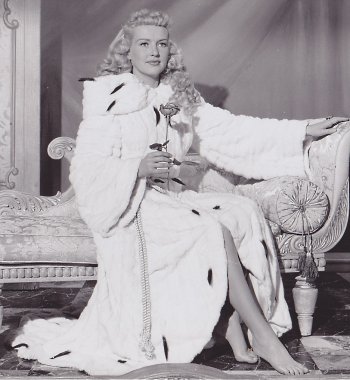 That Lady in Ermine is a 1948 adaptation of a German operetta, which had previously been adapted into a stage play and a silent film. It stars Betty Grable, Douglas Fairbanks Jr., and Cesar Romero. It was directed by Ernst Lubitsch and an uncredited Otto Preminger.

On the wedding night of Countess Angelina of Bergamo (a Real Life place in northern Italy), her small state is invaded by Hungarian hussars. Her newlywed husband is forced to flee, and the invading army comes in unopposed.

Hope comes instead from a supernatural force. Francesca "The Lady in Ermine", a previous countess from three centuries ago had saved the castle before from invaders, wearing nothing but an ermine coat; even her feet were bare. The other ghosts in the castle appear and call on Francesca's spirit to once again save the day. It turns out Francesca's legendary act, and how she plans to save this nation again, aren't as simple as it seems.

This was Ernst Lubitsch's last film; he died just over a week after filming started. Otto Preminger took over and completed the film, but asked not to be given a directorial credit out of respect for Lubitsch.

Not to be confused with the Leonardo da Vinci painting "Lady With an Ermine".