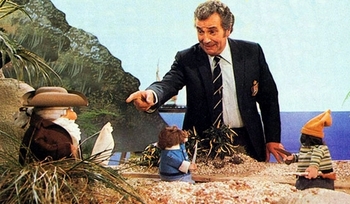 Michael Bentine's Potty Time was a long-running British children's show, starring Michael Bentine, directed and produced by Leon Thau for Thames Television on ITV. It ran from 1973 to 1980. The episodes consisted largely of distinctive, bearded puppets (called "Potties"), comically re-enacting famous historical situations. There were two or three 2-foot tall Potties and about six 1-foot tall ones, with numerous costume changes. Bentine appeared as himself, introducing two stories in each half-hour episode and often arguing with the Potty characters over some of the more implausible incidents.