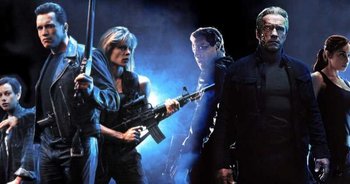 Character page for the Terminator franchise.

Pages for the characters appearing in the continuity formed by The Terminator, Terminator 2: Judgment Day and Terminator: Dark Fate.

Character sheets for the entries that came between Judgment Day and Dark Fate have been moved on separate pages due to their Alternate Timeline/Alternate Continuity status induced by the Un-Reboot that came with Dark Fate.

Character sheets for the video games that are either canon to the main trilogy, the AU sequels, or a continuity of their own.