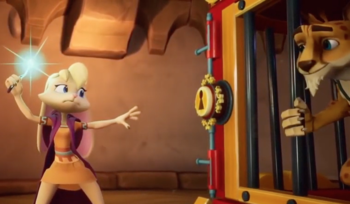 Alohomora!
Brandy: Mr. Whiskers, that is the most amazing thing I've ever seen! How did you do it?
Mr. Whiskers: Eh, I honestly do not know, I'm a rabbit. Magic just comes naturally.
— Brandy & Mr. Whiskers, "The Magic Hour"
Advertisement:

The Pull a Rabbit out of My Hat trick is a popular magic trick where a magician takes off their hat, usually a top hat, and pulls out a live rabbit from inside it, almost as if they conjured it from thin air.

With the popularity of Beast Man and World of Funny Animals stories in pop culture, cuddly little bunny-rabbits will most definitely be used. For the sake of irony, the old Pull a Rabbit out of My Hat would be inverted in this case and instead of rabbits being used as props (unless a lovely assistant is needed), they themselves play the magicians. Now that is not to say that the rabbit has to be anthropomorphic to the point of opposable thumbs. After all they are magic, so thumbs are optional.

To fit this trope, they will usually be dressed in a uniform that reflects this, kind of like typical Stage Magician apparel — a black and white penguin tux with a top hat and a flower corsage and a black wand with white at the tip. Many of their magic tricks coming across as the various misdirections associated with the act (card tricks, coin tricks, sawing women in half, etc.). Depending on how the setting works, they will either be very good at the typical smoke-and-mirrors misdirection that Stage Magicians are known for, they may know actual magic and use magician tricks as a means of focusing it or (if actual wizardry is commonplace) they convince people that their phony tricks are real.

Compare with Cats Are Magic and Rascally Rabbit.

Bianca is apprenticed to the Sorceress.

Bianca is apprenticed to the Sorceress.