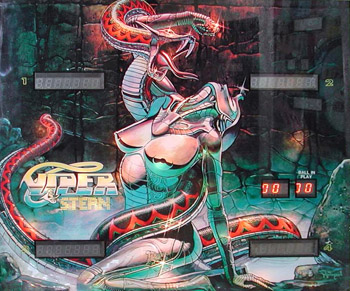 Viper is a Physical Pinball Table designed by Joe Joos Jr., and released in 1982 by Stern Electronics.

The viper in question is the "Roto-Shooter," a rotating turret in the center of the game's playfield. When a player shoots the ball into the top center lane, it falls into the turret, allowing the player to fire at flashing red arrows around the table and raise the score multiplier. The game also offers three-ball multiball and three separate Specials; unfortunately, it didn't play very well in practice, with unbalanced scoring that confused players, and failed to sell in any significant numbers.

Viper is more memorable for its eye-grabbing backglass, which depicts a kneeling Fembot as she is about to be attacked by a red-and-chrome robot serpent rearing over her head. This was one of only two commercial pinball tablesnote The other being Stern's Iron Maiden with art by noted fantasy illustrator Keith Parkinson.

Copies of the Viper art periodically show up in prints and posters, often with no indication of its pinball roots.