Lord of the Ocean 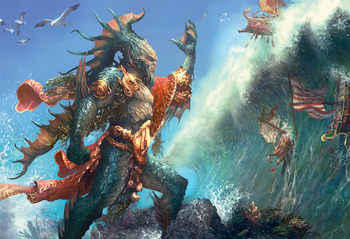 "You pitiful, insignificant fools... Now I am the ruler of all the ocean! The waves obey my every whim. The sea and all its spoils bow to my power!"
— Ursula after gaining King Triton's trident, The Little Mermaid
Advertisement:

For every thing, there is a god. There are gods of Love and War, Good and Evil, the Heavens where the creators of the world reside and the Underworld where the dead leave to rest. In between the high and the low lies the second half of that big blue horizon: the deep blue sea.

Gods of the Water often reflect the very nature of their domain, being temperamental like a calm ocean that can swiftly shift into a raging storm. They often wield the Prongs of Poseidon (the most notable wielder being, of course, Poseidon himself), and anatomically either resemble humans, possess fish-like characteristics like gills and webbed feet, or are full-on merpeople. Given that they are gods, the Mermaid Problem is usually absent.

Offerings are made to them by Pirates and Superstitious Sailors for safe sailing and a bountiful catch. Those who perish at sea look to them as guardians for their poor unfortunate souls being ferried to the afterlife. Sea Monsters answer to them, sinking the ships of sailors that fail to take proper precautions before crossing the enigmatic oceans.

Compare and contrast Water Is Womanly, often more calm and graceful as associated with more "still" water. Contrast God of Fire, gods that deal with fire and/or volcanism.

A Sub-Trope to Stock Gods.