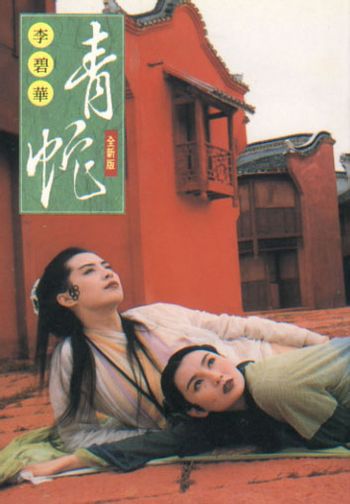 Green Snake (青蛇) is a Hong Kong movie starring Vincent Zhao, Maggie Cheung and Joey Wong, directed by Tsui Hark and released in 1993. It is based on the eponymous novel by Lilian Lee, itself based on a famous Chinese folk tale.

Green Snake and White Snake are two female serpent-spirits. Aged 500 and 1000 years respectively, they have trained for centuries in order to take up a human appearance and eventually become fully human. This would raise their status on the karmic scale and bring them closer to the Enlightenment promised by Buddha to all living beings.

White Snake, in her guise as a beautiful young maiden, seduces a scholar and intends to bear his child in order to complete her passage in the human realm. Her young sister Green Snake isn't nearly as good, and occasionally allows her serpent nature to slip through—she still has a taste for bugs and sometimes finds crawling on the floor easier than walking. Both need to hide from a fanatical exorcist who considers shapeshifting creatures to be an offense to the natural order.