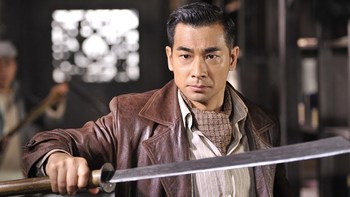 Vincent Zhao Wen-zhuo (Born 赵文卓, 10 April 1972 in Harbin, China) is a Chinese martial artist, actor of action cinema and often billed as the Poor Man's Substitute for Jet Li, especially with his role as Wong Fei-hung in Once Upon a Time in China, where he replaces Jet as Master Wong in the fourth and fifth films of the series.

Born in Heilongjiang, China, as the youngest of three boys, Zhao's interest in wushu starts at a young age from his father, a martial arts practitioner, and his mother, a professional sprinter who broke the woman's record for sprinting in Heilongjiang.

Zhao made his film debut while still a student in the Harbin Wushu Academy, in the 1993 movie Fong Sai-yuk starring alongside Jet Li, where the then 21-year-old Zhao plays the Big Bad. According to Zhao, he was told by director Corey Yuen to "look evil" (despite being too youthful and adorable-looking to convincingly play a villain) by "looking at people from the corner of your eyes with your profile facing them."

After Jet Li terminates his contract with the Once Upon A Time In China franchise, the studios remembered they still have Zhao under their payroll, and casted Zhao as The Other Darrin for Wong Fei-Hung. Ironically, Zhao's Star-Making Role is also the same role that made Jet Li a household name, the martial artist Wong Fei-hung, and from there Zhao would star in bigger films like The Blacksheep Affair and Green Snake until his eventual career killer, the utterly tasteless exploitation flick Body Weapon condemns him to TV dramas or low-budget series until True Legend (2010).

Despite True Legend under-performing financially, Vincent Zhao's portrayal of Su Can in the movie is enough to convince studios that yes, this discount Jet Li still have what it takes to be an action star and a convincing, charismatic actor.