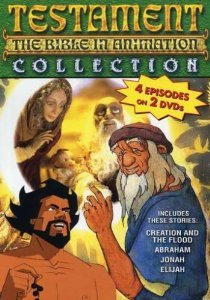 Testament: The Bible in Animation is a 1996 Animated Series produced by Sianel 4 Cymru. It features animated versions of stories from The Bible, each story using its own unique style of animation. It ran for two seasons in the United Kingdom and won one Emmy, with three nominations, in the United States.
Advertisement:

Not particularly well known, it still managed a DVD release.