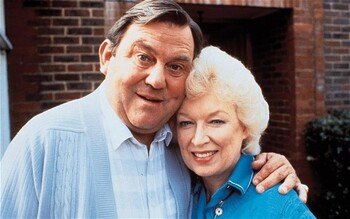 Terry and June is a BritCom which ran from 1979 to 1987. It concerned a middle-class couple named Terry (played by Terry Scott) and June Medford (played by June Whitfield). Terry is headstrong and determined, but his childish demeanor has a tendency to lead to hilarity ensuing. Meanwhile, June is the patient wife, patient, but willing to criticize him. As such, the show is just about Terry getting in way over his head and June having to help him out. An expanded cast includes Terry's boss Malcolm Harris, who frequently has affairs, Sir Dennis Hodge, who is a grump man, and his secretary Nora Fennell, who has unrequited love for Dennis.

The show has an interesting history. Terry Scott and June Whitfield had previously starred together on an earlier sitcom called Happy Ever After, playing the characters Terry and June Fletcher and being almost identical to this one. When John Chapman, who was the head writer for the series, decided to call it quits, The BBC brought in fresh new writers and changed the name of the series, alongside the surnames and settings of the characters.

Although it was frequently derided as a "safe" sitcom, it nonetheless did very well, running for 9 seasons before unceremoniously ending.