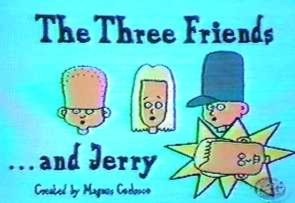 The Three Friends and Jerry (1998-1999) is an animated television series, created by Magnus Carlsson and co-produced by two production companies. One Swedish, the other British.

Life is not easy at age 10. And Jerry can attest it.

Jerry is the new kid that has come to school. Doing his best to somehow fit in the society before his eyes, he tries to join the so-called "three friends" (Frank, Eric and Thomas), who don't feel like wanting to have him alongside them. The guys themselves try their hardest to attract girls, so they're not without hardships either. When you're unpopular enough to be rejected by a group that is already unpopular for the rest, you know things will only get worse from here.

The series is a production with roots in Sweden and the United Kingdom, debuting on Nickelodeon in Latin America and was part of Fox Family's "The Basement" block (a block of cartoons that came on around the time that most kids would be out of school, back in the days when free-to-air TV and basic cable channels that weren't like Toon Disney or Cartoon Networknote read: channels that show animated shows 24/7/365 had animation blocks on during weekday afternoons). Sadly, it was, in a way, too ahead of its time. The show was criticized for its child-unfriendly content, including sexual references, illegal and morally questionable actions that children might see as fun to imitate, and offensive language (one episode had the kids get in trouble for swearing).

The Three Friends and Jerry contains examples of: