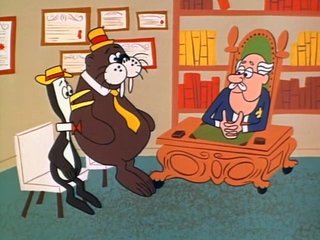 Total Television created this Saturday Morning Cartoon for CBS in 1963 as a response to the famous "vast wasteland" speech given two years earlier by Newton Minow, who was then head of the FCC.

Tennessee Tuxedo, a penguin, and his walrus friend, Chumley, sought to improve their lives in the zoo. Despite gaining helpful information from their friend Phineas J. Whoopee, Tennessee and Chumley still ran afoul of zookeeper Stanley Livingston.

Supporting segments included The Hunter and Tooter Turtle, both repeated from King Leonardo and His Short Subjects, as well as The World of Commander McBragg. The series' voice talent included Don Adams as Tennessee Tuxedo, Bradley Bolke as Chumley and Larry Storch as Mr. Whoopee.

When CBS acquired the broadcast rights to Underdog in 1966, Tennessee moved to ABC, where it aired Sunday afternoons. In syndication, Tennessee Tuxedo ran on its own as a series and as a component of Underdog.

Tennessee Tuxedo and His Tales provides examples of: