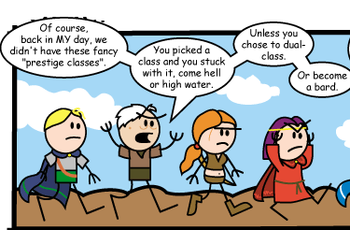 I'm intentionally failing my listen check.
"In after-years [Piglet] liked to think that he had been in Very Great Danger during the Terrible Flood, but the only danger he had really been in was the last half-hour of his imprisonment, when Owl, who had just flown up, sat on a branch of his tree to comfort him, and told him a very long story about an aunt who had once laid a seagull's egg by mistake, and the story went on and on, rather like this sentence, until Piglet who was listening out of his window without much hope, went to sleep quietly and naturally, slipping slowly out of the window towards the water until he was only hanging on by his toes, at which moment, luckily, a sudden loud squawk from Owl, which was really part of the story, being what his aunt said, woke the Piglet up and just gave him time to jerk himself back into safety and say, 'How interesting, and did she?'"
— Winnie-the-Pooh
Advertisement:

A character known for droning on and on about topics of interest to no one but themself. As soon as they launch into one of their anecdotes, those present start rolling their eyes, going to sleep or having surreptitious conversations of their own. To qualify for this trope, it's not enough for a character simply to be verbose; it must be a source of annoyance and/or derision for the other characters.

Compare Blah, Blah, Blah, Motor Mouth, and Rambling Old Man Monologue. The character doesn't necessarily have to be really old (as in retirement age), but if a child or childlike character under the age of forty exhibits such behavior, will come across not as this trope but as the somewhat similar Constantly Curious. Subtrope of The Bore. Sister trope of Windbag Politician. Frequently overlaps with Alter Kocker, if the character is Jewish or Jewish-coded.