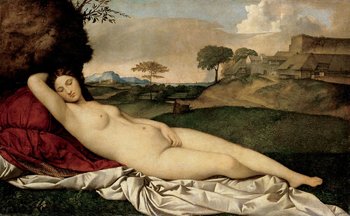 The Sleeping Venus, also known as the Dresden Venus, is a painting traditionally attributed to the Italian Renaissance painter Giorgio "Giorgione" Barbarelli da Castelfranco, although it has long been usually thought that Titian completed it after Giorgione's death in 1510. The landscape and sky are generally accepted to be mainly by him. In the 21st century, much scholarly opinion has shifted further, to see the nude figure of Venus as also painted by Titian, leaving Giorgione's contribution uncertain. After World War II, the painting was briefly in possession of the Soviet Union.

The painting, one of the last works by Giorgione (if it is), portrays a nude woman whose profile seems to echo the rolling contours of the hills in the background. It is the first known reclining nude in Western painting, and together with the Pastoral Concert (Louvre), another painting disputed between Titian and Giorgione, it established "the genre of erotic mythological pastoral", with female nudes in a landscape, accompanied in that case by clothed males. A single nude woman in any position was an unusual subject for a large painting at this date, although it was to become popular for centuries afterwards, as "the reclining female nude became a distinctive feature of Venetian painting".

The painting is currently on display at the Gemäldegalerie Alte Meister in Dresden, Saxony, Germany.