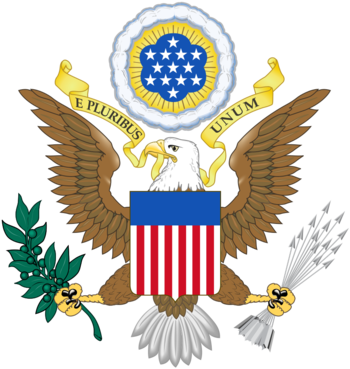 Out of many, one.
Advertisement:

The bald eagle, the national bird of the United States, is one of the most well-recognized national animals in the world. It was originally chosen by the nation's founders as a deliberate callback to The Roman Republic, whose symbol had been the eagle of Jupiter (this is why many European nations have used eagles as their symbols, as well), but with the recognizable and distinctly American bald eagle replacing the traditional golden eagle in order to set themselves apart as something new and distinct from Europe.

There are a number of ways this can be used in fiction. Generally, bald eagles can be used as visual symbols for the United States or expies thereof — expect a lot of eagle statuary, eagle iconography and pet eagles associated with American buildings, organizations and individuals in these cases. In settings where most or several characters are talking animals, American ones have a strong tendency to be depicted as bald eagles, and all bald eagles will be American. These characters are almost invariably depicted as outrageous American stereotypes, incredibly patriotic, utterly enamored with America and American values, and deeply distrustful anything deemed anti-American. Notably, however, it's rare to see such characters contrasted with the symbolic animals of other nations, such as the Russian Bear.

Of note is that depictions of the bald eagle in pop culture often give it a bold, powerful screech that actually comes from the red-tailed hawk. The actual sounds made by the bald eagle are softer and chirpy, more akin to what one might expect from a sparrow than from the mighty, proud embodiment of Eagleland.

Not to be confused with the clothing and accessories retailer or the regional subsidiary of American Airlines by the same name.