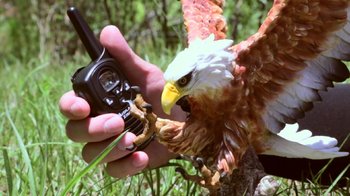 Detective Heart of America is on TV Tropes!
Advertisement:

Detective Heart of America is a series of live-action shorts and one feature-length film created by FilmCow that parody Eagleland tropes and beliefs. The videos are filmed with prop statues that are given voice acting and character in post. The videos focus on an eagle prop named Heart of America, America’s greatest detective, tracking down and confronting criminals that pose a threat to American citizens.