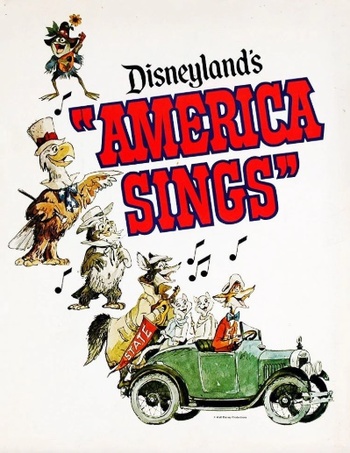 America Sings is a former Disneyland attraction that opened on June 29, 1974, replacing the Carousel of Progress. The animatronics' designs were conceived by imagineer Marc Davis, who previously worked on those of Country Bear Jamboree.

The attraction was a revolving theater attraction like the Carousel of Progress, featuring more than a hundred audio-animatronic animals teaching the history of American music through performing popular songs from four different eras: mid-19th century in the Deep South, late 19th century in The Wild West, in the Gay Nineties, and early to mid-20th century in The City. The show was hosted by a bald eagle named Sam and an owl named Ollie.

The attraction closed in 1988, and the majority of the animatronics were promptly moved to Disneyland's version of Splash Mountain, which opened the following year.