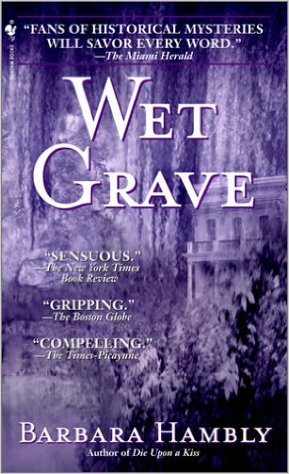 Long-running Historical Detective Fiction series by Barbara Hambly, detailing the crime-solving adventures of Benjamin January (or "Janvier" if you happen to be in the Vieux Carré) in New Orleans of the 1830s. Benjamin was born a slave in the Louisiana cane plantations, but his mother was purchased and freed as a placée (a status somewhere between wife and mistress, denoting a legal relationship between a white man and a woman of color) when he was still young; her benefactor also freed her children into the bargain. As a result, January receives a classical education in Paris, and trains as a surgeon and a musician. He returns to New Orleans after the death of his wife, and promptly is thrown into webs of intrigue, politics and the occasional murder, along with his companions: dissolute Irish violinist Hannibal Sefton, Lt. Abishag Shaw of the New Orleans City Guard, and a motley roster of characters of all professions and colors.
Advertisement:

The series to date includes:

There are also several short stories, available for purchase on Hambly's website