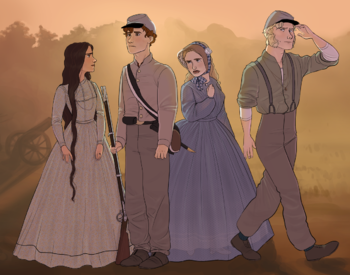 Mintcy, Ben, Charlie, Jethro
"We sure as Hell ain't a lost cause."
Advertisement:

refers not only to the devastated physical and psychological state of the south, but a story following four young southerners as they face individual hardships of the Civil War.

In the year 1861, Benjamin "Ben" Sorderer volunteers to fight for the Confederate army in hopes of winning his father's approval , and proving his courage to himself and a certain girl. Ben finds out the hard way that being a war hero means sacrificing the things he loves the most. The webcomic offers a modern look into the social and ideological issues faced by adolescents of the era.

The story begins in 1851, exploring each of the four character's starkly different childhoods growing up in the Victorian period. Read the comic here

Tropes used by Lost Cause