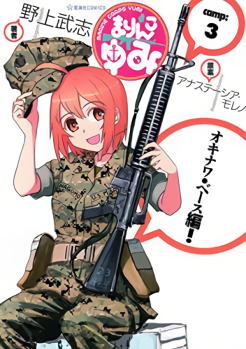 Yumi Nagumo is a girl with a dream: Become the president of the United States of Amerigo! Unfortunately, she has no foresight and has no idea about Amerigo's culture. So, the second she lands in Amerigo, she needs help. In steps a group of vets in a Southwest diner who tell Yumi the best way to become president.

Marine Corps Yumi is a manga drawn by Takeshi Nogami of Strike Witches and Girls und Panzer, and written and translated by Marine Anastasia Moreno. The series shows remarkable accuracy thanks to Moreno's former experiences.

translated the rest of the chapters in April 2018. On June 20th, 2017, Takeshi announced that he had finished all the stories of Marine Corps Yumi for a total of seven volumes.

One can read the English version here