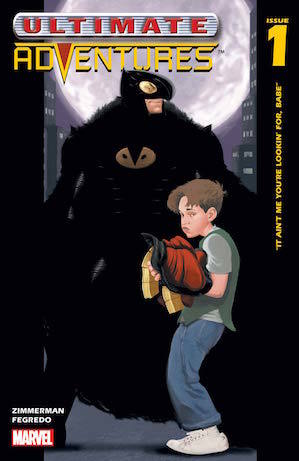 YOU'RE not Quantum and HE'S not Woody!
Advertisement:

Ultimate Adventures was a six-issue Marvel Comics miniseries created by Ron Zimmerman and Duncan Fegredo. Part of Marvel's 2002 "U-Decide" campaign, it told the story of Hank Kipple, an orphan who is taken in by eccentric billionaire Jack Danner - who moonlights as the costumed vigilante Hawk-Owl - and his transformation into teenaged sidekick Woody, set in the Ultimate Marvel universe.

Plagued by chronic lateness, the final issue came out sixteen months after the series began, and it's since faded into obscurity, overshadowed by its fellow "U-Decide" competitors, the Captain Marvel reboot and Marville.

Jack and Hank would largely remain forgotten outside of their series, although they made a small cameo in the first issue of the second volume of Ziggy Pig-Silly Seal Comics.