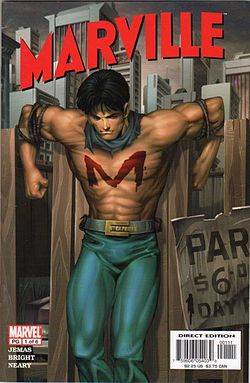 Somebody save meeeeeeee....
"Before I can be a hero, I have to figure out what's right and what's wrong. We need to figure out the meaning of life. Where it all started and where we're all going."
— Kal-AOL Turner, Marville #2
Advertisement:

A parody comic created in 2002 by Marvel Comics editor and president Bill Jemas, as a bet between him, Ron Zimmerman, and Peter David on who could make a better-selling comic, which was known as the "U-Decide" event.

Kal-AOL Turner, son of Ted Turner from the year 5002, is transported into the present day. Believing himself to be a superhero, Kal-AOL meets up with Mickey (who nicknames him "Al") and Lucy. And crosses paths with Spike Lee and Rush Limbaugh. The first books are also filled with attempts at parody and topical humor.

Then it takes a turn for the philosophical when they all go back in time and meet God, who is actually a black man named Jack. After that, they watch the evolution of the world, and discover that dinosaurs talked with Jewish mannerisms, and Wolverine is the first human, evolved from an otter.